About The Queen's Regiment › The Regimental Badge ›

Origins of The Queen's Regiment Badge

Formed from the Forebear Regiments

The Regimental Badge of The Queen's Regiment 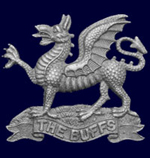 It was Queen Anne, who in about 1707 awarded The Dragon to The Buffs, which was quite uncommon at that time for such an honour to be bestowed upon a Regiment. This was in honour of the recognition of the Tudor origins of The Buffs. The surrounding of the regimental badge, inscribed 'Honi Soit Qui Mal Y Pense' (Shame upon him who thinks ill/evil of it), was the garter originally awarded to The Knights of the Order of the Garter. This was founded in 1348 by King Edward III and taken from the Royal Sussex's Regimental Badge and is England's oldest Order of Chivalry.

The crown-piece of the Queen's Regiment Badge, are the ostrich plumes awarded to the East Middlesex Regiment by the 15th Prince of Wales and were originally worn at the Battle of Crecy in 1346, by Edward, The Black Prince.

The 15th Prince of Wales considered the East Middlesex Regiment to be deserving of his plumes for its exploits in India and this was granted by his father the King and included in the Middlesex's Regimental badge.

Formed by amalgamation of the Queen's Royal Regiment and the East Surrey Regiment.

The new badge incorporated the Royal Crown of The East Surrey's and the Paschal Lamb of the Queen's Royal Regiment, mounted on the Garter Star. However, the cap badge was only worn by the Regiment's Territorial Battalions.

SSAFA - Lifelong support for
our forces & their Families