Please be aware that the RBL are working towards business as usual for the Cenotaph Dispersal on Remembrance Sunday which of course will be governed by advice and restrictions that come from Government to ensure the health and safety of all participants. There will be a restriction on numbers, therefore, allocation of tickets will be made, with those who have not been before taking priority.
Applications have now closed

Christmas Message from the President

"On Christmas Day today, as 2020 draws to its close, I am sure that there will not be one of us who cannot reflect in some measure on the manner in which the extraordinary tandem circumstance of the political hiatus of Brexit and the onslaught of the coronavirus epidemic has affected us, our families, loved ones, and friends. The Queen’s Regimental Association has not escaped.

Despite the trials and tribulations of the year, what has been so encouraging is the continued engagement, throughout the Association, of the branches and members. You have never failed to foster our collective regimental spirit, to fundraise and, above all, to keep a weather eye for those who need our help, attention and assistance. In respect of the last and particularly given the recent strictures which will doubtless have altered everyone’s plans for Christmas, might I ask you all to cast a thought for those in our regimental family who are most likely to be alone over the Christmas period and who would be grateful to hear from anyone via a call, Skype or Zoom or even just a message to assure them that we are here for them. I have been delighted that, with one notable albeit limited exception, my request at the AGM for people to be more thoughtful about the way they use social media has been heeded: we have seen greater care and consideration and as a result been able to react positively to the signals that steer our fundamental, benevolent activity

I must pay testament to our Secretary, Alasdair Goulden, who works tirelessly in all aspects of the Association’s endeavour on our behalf. As he will be sending this message out, I know he will be embarrassed, but so be it. He deserves all our thanks

It remains for me to wish all of you ‘A Very Happy Christmas’ – as merry as you can and, I know will achieve – and, for all of us, a 2021 that will take us back to a normal way of life and further strengthening of the Association in all we do."

Turning of The Page - An Act of Remembrance

Due to Covid restrictions, The Dean of Canterbury Cathedral filmed a version of the special Turning the Page ceremony for today. At 11AM this morning, Canterbury Cathedral used the Regiment's Turning of the Page of Remembrance as a central part of their commemoration. The video can be viewed at https://youtu.be/pW6um2JgqnY 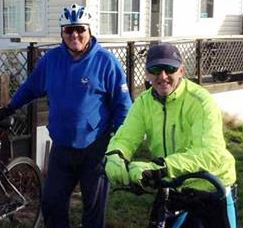 Bob Fisher and Radar Cope have decided that each of them is fitter than the other. They have decided that there is only one way of deciding and that is to race a figure of eight 50 mile circuit on bicycles. So on 25 March they will set off from Westgate under race conditions. To make the race more interesting they have also challenged each other to raise money for the Queen's Regiment Benevolent Fund. A prize will be given to the winner of the race and to the contestant who raises the most money for the benevolent Fund.

You are invited and encouraged to donate at www.justgiving.com/fundraising/queensregimentbenevolentfund and in the message box insert either Bob or Radar so that we can determine the winner. Please do not forget to tick the Gift Aid Box.

To help you decide who to support if you do not know either of these gladiators the following race card information is available.

They are both 60 years of age although Bob is a couple of months younger than Radar. Bob is a keen cyclist and has a very expensive cycle on which he has years of experience. He has been training for a Round Britain tour as well as this race. Bob was part of the Channel swimming relay team and has completed in triathlon events although the results are not known. He looks disgusting in a mankini.

Radar has spent the last two years cycling 10,000 miles around Britain and Europe albeit as a tourist. Up until a month ago Radar had never ridden a road bike. His bike has been lent to him by a mate and is worth a mere 300 quid. He also looks disgusting in a mankini.

Bob is a somewhat rotund individual. Radar is a bit of a racing snake.

Neither will be wearing mankinis on the day - if they do they will be disqualified for bringing the Regiment into disrepute.

Please dig deep and support these two lunatics in their endeavours before they are taken away by the men in white coats.

Through my membership of the Trustees of the Princess of Wales’s Royal Regiment Benevolent Fund as representative of the Queen’s Regiment, QRA exercises the delegated authority to fundraise and disburse benevolence to entitled beneficiaries of the Association. This is the legally correct position.

While QMRW was very laudably establishing itself (and was given Branch status of the QRA) and using the name of the Queen’s Regiment in its title, I was content that it should act under the umbrella of the Association’s charity number, which, by implication, restricted its activity to Queen’s Regimental benevolence.

QRMW also arbitrarily disburses grants to an unspecified ceiling without the validation – either in advance or retrospectively – of service charity caseworker input. This is unacceptable to QRA, as it is outside the authority currently delegated to QRMW.

I therefore have had to insist on the removal of the words ”Queen’s Regiment” from the title, the inclusion of which clearly suggests that the QRMW fundraises solely on behalf of former members of the Queen’s Regiment. This is, unfortunately, manifestly misleading.

My concern is the possible exposure of QRA to representational and reputational vulnerability by activity over which it neither has oversight nor upon which it can apply regulatory limitations. I am also persuaded by my opinion that larger service charities are better placed and amply funded to meet the demands of the tri-service community.

QRA notes QRMW’s intention and aspiration to operate under its own charity number and its wish to fundraise and disburse benevolence autonomously more widely than is constrained by the implication of its current title. It has, therefore, been suggested to QRMW that it should seek a new title reflecting more accurately its aims and objectives. Given that evidence of the Queen’s Regiment pervades the memorial woodland and that the woodland site was created specifically in memory of the Queen’s Regiment, QRA would have no objection to the following being included in the new title of the QRMW’s charitable trust:

‘(Founded in memory of The Queen’s Regiment)’.

I announce hereby that QMRW will cease to be a ’Branch’ of the QRA with effect from the 2017 AGM: the memorial woodland has been invited, under its new title, to assume Associated Branch membership and it is very much hoped that this will be accepted.

It is emphasised that benevolence for members and dependents of the QRA remains available through the QRA and it is hoped that there will be referral as relevant through the newly established woodland under its new guise.

It remains to be said that the intentions and objects of the QRMW are admirable and it is matter of regret that they are not able to deliver benevolence to members of all three services in the revered name of the Queen’s Regiment, of which they and we are all very rightly proud. The trustees of the QRMW are individually, and will continue to be, members of the QRA family and very welcome they are.

A MESSAGE FROM THE PRESIDENT

On 31 December 1966, 50 years ago today, our Regiment was formed. I have sent a message of loyal greetings to the Queen’s Regiment’s Allied Colonel-in- Chief, HM Queen Margrethe II of Denmark, on behalf of us all.

2016 has been a memorable year with perhaps the most significant event the creation and dedication of the Queen’s Regiment Memorial at the National Memorial Arboretum in May.  Additionally, we were all saddened by the deaths of General Mike Reynolds, last Colonel of the Regiment and first President of the Association, Colonel Toby Sewell, the last of the founding Commanding Officers of the Queen’s Regiment’s battalions and WOI (RSM) Jack Chaffer, along with many others who died during the year.

I am delighted to record the sustained vitality of the Queen’s Regimental Association, the listed membership of which has increased by nearly 900 in the last few years. Branches are congratulated on continuing to foster the spirit of comradeship and local representation, for their magnificent fundraising efforts and for maintaining an ever watchful eye on those in need of regimental benevolence.

Looking forward, there could be no more appropriate initiative to mark our 50 years than the recently launched appeal for artefacts and documents to revitalise the Museum at Dover Castle as a fitting representation of both The Queen’s and Princess of Wales’s Royal Regiments.  I urge you all to contribute anything that you may have which may be of interest in order to ensure that our 25 years as England’s senior infantry regiment are duly preserved in a way that truly informs and speaks to all who visit the Museum.

Finally, I take this opportunity as President and Chairman of the Regimental Association to wish all Queensmen and all within the regimental family a Very Happy New Year and the best of good fortune on our 50th Anniversary. To paraphrase General Reynolds in the Foreword of Soldiers of the Queen:

‘I commend the Queen’s Regiment to all who take a justifiable pride in the British Army.’

The PWRR and Queens Regiment Museum are holding a Christmas Carol Service and supper in St Mary Castro in Dover Castle this year on the 4th December at 1800hrs. The Revd Canon Paul Kerr is conducting the service and the music is being provided by the Snowden Colliery Welfare Band.

Tickets are priced at £12 for adults and £5 for children. This included supper, car parking and a short talk from one of the Regiment’s historians. Artefacts from the museum will also be on display together with staff and volunteers on hand to answer questions. Please complete the attached form and return to Henry Thomas MBE by the 15th November 2016. Places for this event are limited to 200 so please book your place early!

The Royal British Legion (RBL) have changed the format for applying for tickets for the Cenotaph Parade which will take place on Sunday 13 November.

A security requirement has been imposed by the Metropolitan Police as they will need to conduct individual security checks on all participants.

Ticket holders will need to bring both photographic ID and a document showing proof of address with them to access Horse Guards Parade via the manned police entry points on the day.

The AGM was held at the Union Jack Club in Waterloo once again this year, with a splendid performance by The Queen's Regimental Association Corps of Drums

Under the direction of Tony Willson (1st & 3rd Queens), former Members of the Corps of Drums from all Battlalions are currently rehearsing, with a view to making public appearances, in order to raise funds for the benevolence of our former Queensmen.

Date of the first performance will be announced at a later date.