Britain and France were allies of Turkey, and when the Ottoman sultan declared war on Russia, the British Army became involved in a conflict that revealed yet again the courage, tenacity and endurance of the British units against a background of almost unbelievable administrative incompetence.

The Queen's, fighting in South Africa, were not involved, nor were the 35th and 70th, in Burma and India. The 50th, 57th and 77th all fought in the battles of the Alma River and Inkerman, and The Buffs, the 31st, 50th and 97th besieged and then stormed the great fortress of Sevastopol.

The 77th was commanded by Lt. Col. Graham Egerton, a brilliant soldier and the largest man in uniform that William Howard Russell, the famousTimes Correspondent in the Crimea, had ever seen. Described by Lord Raglan, the Commander-in-Chief, as "one of the best officers in the Army and looked up to by all", Lt. Col. Egerton was killed at Sevastopol, and the siege and capture were commemorated in the 50th by a Regimental Day on 8 September each year. Major Maude and Private Connors of The Buffs, Colour Sergeant Gardiner and Private McCorrie of the 57th, Sergeant Park and Private Wright of the 77th and Captain Lumley and Sergeant Coleman of the 97th were all awarded the recently instituted Victoria Cross for conspicuous gallantry.

This expression has been used for many years by people with no connection with the Regiment but who assume it originated in some desperate battle. The truth is less exciting. In August 1857 a 2nd Battalion was raised at Limerick and moved, in 1858,t o Malta where it shared Florian Barracks with the Royal Scots Fusiliers. The Adjutant of the 2nd Buffs, named Cotter, had been a Sergeant Major in The Royal Scots Fusiliers and, to encourage young recruits on drill parades, was wont to shout 'Steady The Buffs! The Fusiliers are watching you!' perhaps more often than was strictly necessary. This amused the Fusiliers who repeated it whenever possible for years afterwards.

Edward Cardwell, Liberal Secretary of State for War, introduced major reforms dealing with enlistment and abolition of the system of purchasing commissions and promotion. In 1872 he linked battalions in a regiment to ensure regular exchanges between home and overseas stations, and gave each regiment a county affiliation and a recruiting and training depot in its county. The result was that in due course The Queen's became The Queen's Royal (West Surrey) Regiment, The Buffs became The Buffs (Royal East Kent) Regiment, the 31st and 70th became the 1st and 2nd Battalions of The East Surrey Regiment, the 35th amalgamated with the 107th Foot to form two battalions of The Royal Sussex Regiment.

The 107th was originally the 3rd Regiment of Bengal European Infantry, raised by the East India Company in 1853 and transferred to the British Army, as the 107th, after the Indian Mutiny. The 50th and 97th came together as the two battalions of The Queen's Own Royal West Kent Regiment, and the 57th and 77th became the 1st and 2nd Battalions of The Middlesex Regiment.

In January 1885, at Abu Klea, The Royal Sussex took part in the battle against the Dervishes, famous in history as the one occasion on which a British square was broken. Kippling wrote a poem about it, but a study of the battle reveals that the enemy did not break the square but got into it through a gap caused by a move to reinforce the left face. The enemy version of events was that the square was opened deliberately to let the Dervishes in and then closed to kill them all and none survived. Eleven hundred enemy dead were counted after the battle, The Royal Sussex had 5 killed and 26 wounded. 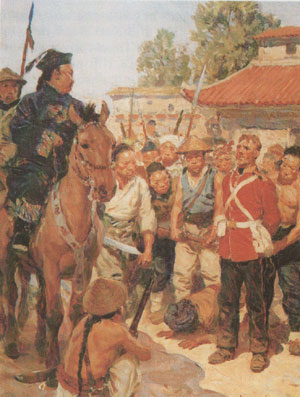 All the Regiments now in The Queen's Regiment were represented in the Boer War in South Africa. The 2nd Queen's fought at the Tugela River, Spion Kop and the Relief of Ladysmith, the 2nd Buffs pursued the Boer leader Piet Cronje until he surrendered at Paardeberg, fought at Bloemfontein and occupied Pretoria. The 2nd East Surreys were also at the crossing of the Tugela River and in action at Colenso, Wynne's Hill and Pieter's Hill, and during these latter operations Private (later Sergeant) Curtis won the Victoria Cross for bringing in his wounded Commanding Officer under intense fire.

The 1st Royal Sussex joined Lord Robert's army at Bloemfontein, took Johannesburg and finally marched into Pretoria, and the 2nd Royal West Kent's were in many minor engagements against the Boers. The 2nd Middlesex were also at Spion Kop, in what appeared to be a desperate situation until reminded by one of their subalterns that they were all "Diehards" now. They also took part in the Relief of Ladysmith and several actions in the Transvaal. The war should have ended when Pretoria, the Boer capital, was occupied in June 1900, but the Boer "Kommandos" fought on until finally compelled by Lord Roberts' policy of attrition to end the war on 1 June 1902. 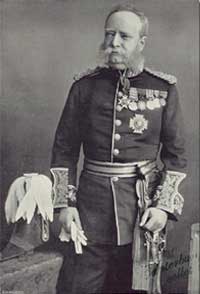 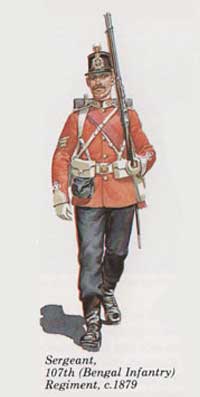 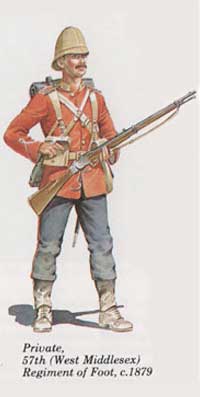 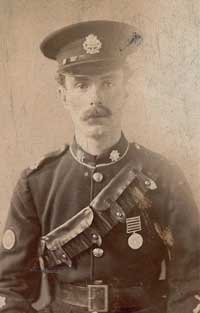