From the Napoleonic Wars to the Crimea

When Napoleon had been sent away to the lonely South Atlantic island of St Helena, where he died in May 1821, the European nations were able to sort themselves out reasonably peacefully from the changes he had imposed on them, but during the next 39 years there was little peace for the British Army, whose commitments in defence of the Empire were now world wide. 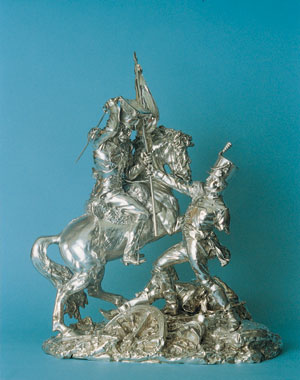 When Napoleon had been sent away to the lonely South Atlantic island of St Helena, where he died in May 1821, the European nations were able to sort themselves out reasonably peacefully from the changes he had imposed on them, but during the next 39 years there was little peace for the British Army, whose commitments in defence of the Empire were now world wide. For example, The Queen's served in the West Indies, fought in the Afghanistan Campaign of 1838 and then became involved in the long series of Frontier Wars in South Africa. The Buffs had to escort convicts to Australia and remain there for 4 years before going to India where, with the 50th, they took part in the Gwalior Campaign of 1843. The 31st were in India, then in the 1842 Afghanistan Campaign. They also with the 50th, played a notable part in the First Sikh War.

The 50th also took convicts to Australia and spent a great many years in the West Indies, Ireland and Mauritius and were granted the title 'Royal' in 1832. The 57th went to Australia and India, and the 77th to Ireland, Jamaica, Malta and Canada.

On 25th March 1824 the 97th of Foot, or the Earl of Ulster's Regiment, was raised at Winchester, in due course it was to become known as the 2nd Battalion of The Queen's Own Royal West Kent Regiment. It went overseas in 1825 and served in Ceylon, Corfu, Halifax (Nova Scotia) and Greece.

In those days soldiers travelled the world, not in comfort but on the cramped and crowded decks of sail driven transports that could take up to nine months to reach Bombay from a home port.

There were two notable incidents involving troopships. In 1825 several companies of the 31st sailed for Calcutta in the East Indiaman when their ship the Kent caught fire in high seas in the Bay of Biscay. Many lives were lost, but the courage and discipline of all ranks rivalled that of the,  The Queen's in the ship Birkenhead in February 1852. This ship struck a rock and sank 50 miles from Simon's Bay in South Africa, and the account written by a survivor, of the perfect calm and discipline on board the sinking ship was read out to every Regiment in the Prussian Army as an object lesson in steadfast courage. Most of the troops were drowned.

During this period between 1815 and 1854 the heaviest fighting was in India, when the Sikhs were persuaded by the British withdrawal from Afghanistan in 1842 that the British in India were militarily too weak to prevent them from conquering the whole sub continent. The crossing of the river Sutlej, the boundary between the Punjab and British India, by the Sikh army of  20,000 men was followed by the four major battle of Mudki, Ferozeshah, Aliwal and Sobraon, and the 31st and the 50th fought with great distinction in all of them.

The defeat of the Sikhs at Sobraon ended the war, although the initial assault on their position, on 10th February 1846, had failed. The British were repulsed with many casualties and it seemed that the battle would be lost. Both officers carrying the colours of the 31st were killed, and at that moment when defeat seemed inevitable, Sergeant Bernard McCabe of the 31st picked up the Regimental Colour, dashed forward under heavy fire and planted it on the highest point of the Sikh entrenchment.

This put new life into the 31st, the 50th and the other regiments which then took their objectives in desperate hand to hand fighting. When the Sikhs at last turned and fled 10,000 casualties and 67 guns were behind them. The 50th emerged from the battle commanded by a subaltern, having lost half the rank and file.

Sobraon Day was celebrated as a great regimental occasion in the Officers' Mess of the 31st the victory was commemorated by the Ceremony of the Huntingdonshire Salt. Part of the Colour carried by Sergeant McCabe was enclosed in the lid of a salt cellar from which every newly joining officer was invited to 'take salt with the Regiment'. He then signed the Salt Book.

Sobraon Day in the 1st Battalion Queen's Regiment was still celebrated each year. The Regimental Colour was handed over by the Commanding Officer to a Sergeant who was selected for the honour, The Colour Party being preceded by the Band and Drums then marched the Colours through the ranks of the Battalion, who lined the route from the Officer's Mess to the Sergeant's Mess where it remained with the Queen's Colour and Third Colour until midnight. 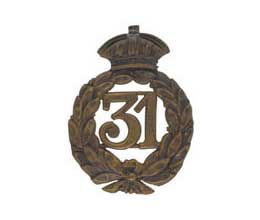 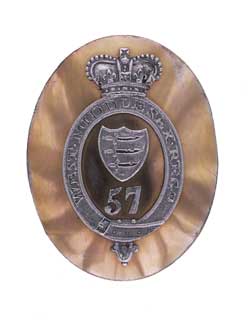 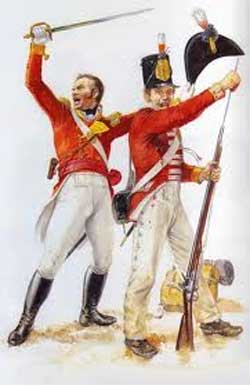 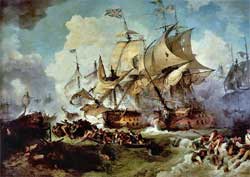