Napoleon had signed the Amiens Treaty only to give himself time to prepare for his invasion of England, and 14 months later he declared war again on the trumped up grounds that Britain had failed to hand Malta back to the Knights of St John in accordance with the treaty. 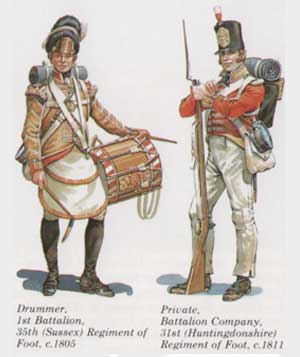 In October 1805 at Trafalgar, Nelson removed the threat of invasion which had led to the raising of  2nd Battalions, notably those of the 31st and 35th, and in July 1807 the 50th were in Sir Arthur Wellesley's force, in Admiral Gambier's fleet that fought at Copenhagen and prevented the Danish fleet from falling into French hands.

The war, which involved most of the European nations, went on until Napoleon was finally defeated by the British and Prussians at Waterloo in June 1815. The main British contribution to it was in Portugal and Spain, in what was called the Peninsular War.

Wellington's success against the French armies in Portugal and Spain can in some degree be attributed to a comparatively minor action between a raiding force of 5,000 men, commanded by Sir John Stuart. Which included a large detachment of the 35th, against numerically superior French troops under General Regnier near the village of Maida, close to the toe of Italy in July 1806. The significance of Maida is not always appreciated. Though of no strategic importance, tactically it was a turning point in the war against Napoleon because it demonstrated that the British line could defeat the French column. Some of Napoleon's finest troops suffered 2,000 casualties, a third of their strength, and British casualties were 200. Wellington applied the lessons learnt at Maida when he went to the Peninsula, two years later.

The 35th did not fight in the Peninsula, they had to take part in a wasteful and ineffective little campaign against the Turks in Egypt. The 2/35th suffered awful loss from disease in the disastrous expedition to Walcheren as also did The Queen's, 50th and 77th, but The Queen's, The Buffs, the 2nd/31st, the 50th, 57th and the 77th all added many of the great Battle Honours of this war to their Colours: Vimiera, Corunna, Oporto, Talavera, Salamanca, Albuhera, Vittoria, Nivelle, Nive, Pyrenees, Orthess and Toulouse.

Three nicknames were acquired. Because the black dye on the cuffs of their tunics came off when they wiped sweat from their faces, the men of the 50th became known as "The Dirty Half Hundred". This was in no way an insult. "Not a good-looking Regiment", said Wellington, "But devilish steady!". The Buffs recovered so swiftly from their fearful losses at Albuhera they were called "The Resurrectionists", and after the same battle, described very briefly below, the 57th were "The Diehards".

When the British expeditionary force under Sir Arthur Wellesley, as he was then known, had defeated General Junot at the battles of Rolica and Vimiera in Portugal. Napoleon decided to intervene personally though not for long and this compelled the force under Sir John Moore to retreat to Corunna for evacuation by the British fleet. The Queen's, 50th and a company of Buffs were in this army which reached Corunna exhausted and found the British ships had not yet arrived. Five days later, on 16 January 1809, the French Marshal Soult attacked with confidence and was defeated. The 50th repeated the bayonet charges the French had been unable to face at Vimiera.

The majors were: Sir Charles Napier who's statue is in Trafalgar Square and Major Stanhope who was killed at Corunna. Both were commemorated by the toast "The Corunna Majors" on the anniversary of the battle.

When Sir Arthur Wellesley returned to the Peninsula later in 1809, The Buffs were the first troops across the river Douro at Oporto, the battle that drove Soult and his army out of Portugal, and they, The Queen's and the 2nd/31st were all at Talavera, the victory that gained Sir Arthur Wellesley a peerage as Lord Wellington. However, it was at Albuhera, where Marshal Beresford and not Wellington was in command, that The Buffs, the 31st (East Surreys) and the 57th (Middlesex) won perhaps their greatest renown in achieving what Marshal Soult deemed to be impossible the defeat of his army.

Learning that Soult was marching to attack him with 23,000 French and Poles, Beresford took up a position on a ridge astride the main road southwards, overlooking the village of Albuhera. The French, as usual, attacked in massed columns supported by artillery firing grapeshot. They came round Beresford's right flank, which was held by Spanish troops The Buffs were rushed into a counterattack against the French left flank. They were making good progress when French Hussars and Polish Lancers charged from their right rear and cut them to pieces. Only 84 men survived unwounded out of 728. The Regimental Colour was captured, with its Ensign killed, but later recaptured by The Royal Fusiliers.

The King's Colour was returned after being found by a fusilier inside the tunic of a hideously gored and apparently dead officer, Lieutenant Latham. He had taken it when its Ensign was wounded by gunfire. Hussars swarmed around him and slashed him mercilessly, but they could not wrench the staff from his grip, and he tore the colour from it as he sank to the ground under their blows. He survived, with one arm chopped off by a surgeon and a crevice across his nose and cheek staunched. (He received from his brother officers a gold medal, which is in The Buffs Museum. The Silver centrepieces depicting his deed have been inherited by the 2nd and 5th Battalions The Queen's Regiment). Commanded by Major L'Estrange, the 2nd/31st formed square in the rear and stood firm, while the Spaniards gave way on their left. They inspired Wellington to write to the War Of office to describe how 'after the other parts of this brigade were swept off by cavalry, this little battalion alone held its ground against all the massed French columns'. The 57th formed the centre of the brigade that came up on the left of the 31st, in place of the Spaniards.

For four hours they withstood a terrible pounding by grapeshot as they engaged the French masses at very short range, never budging except to close ranks, always on their feet. Colonel Inglis was shot through the lung. Refusing to have his wound dressed, he lay propped on an arm in front of his lacerated Colours and kept exhorting his men, 'Die hard 57th. Die hard!'

Ninety  nine of them had died as bidden, and 333 lay wounded, out of a total of 600, when at last the Fusilier Brigade made a magnificent attack from the right, and the remnants of all Beresford's battalions surged forward to complete the rout of the enemy. He tried to stop the 57th and gave Inglis and his men highest praise of all in his account of this epic battle. The war went on for another three years, and the French, defeated in every set piece battle were driven back through the Pyrenees to the soil of France. At length, after the fall of Toulouse in April 1814, the fighting stopped.

Napoleon was exiled to the island of Elba, between Italy and Corsica, and it seemed that after more than 20 years of war, with one brief interlude, peace had at last come to Europe,but not for long.

In June 1814 The Buffs and the 57th were sent to Canada, Britain was at war with the United States over a blockade but they were recalled hurriedly when Napoleon escaped from Elba, landed in the south of France, gathered an army and marched on Brussels to attack Wellington and his Prussian ally, Marshal Blucher. Both regiments arrived at Ostend too late to fight at Waterloo but they remained in France for the next three years where Lieutenant Latham married and retired.

Because the black dye on the cuffs of their tunics came off when they wiped sweat from their faces, the men of the 50th became known as "The Dirty Half Hundred". "Not a good-looking Regiment", said Wellington, "But devilish steady!".

Steady the Drums and Fifes
By Lady Butler 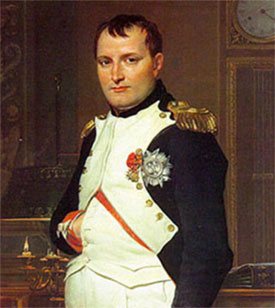 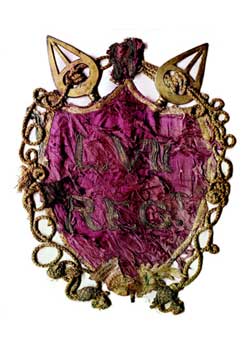 Fragments of the Regimental Colour, taken into battle in Albuhera 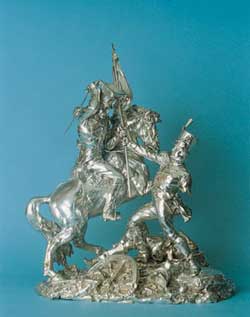 The Latham Centrepiece of the 3rd Regiment of Foot (East Kent)

During the Battle of Albuhera, Lieutenant Latham seized the Colour defending it with heroic gallantry with his sword. Struck with a sabre blow that severed one side of his face and nose but continued to fight on. A second stroke severed his left arm, and was trampled on and pierced several times with lances as the 4th (Queen's Own) Dragoons, arrived and drove off the French. With this remaining strength, Latham concealed the Colour in his jacket. He survived and recovered to remain in the army until he retired in 1820.

For his heroic defence of the Colour, Latham was promoted to Captain and presented with a gold medal by his fellow officers. A trophy depicting the scene, the "Latham Centrepiece" was made for the 3rd Regiment's Officer's Mess. It is now in the Buffs Regimental museum together with Latham's gold medal.