The French and Indian war was the American phase of the Seven Years War and began two years before the war in Europe. In June 1756 the 35th arrived in the Hudson Valley to form part of the garrison of Fort William Henry on Lake George. In July 1757 the fort was attacked by a large force of French and Iraquois Indians under the Marquis de Montcalm, and the garrison fought until there was no more ammunition. 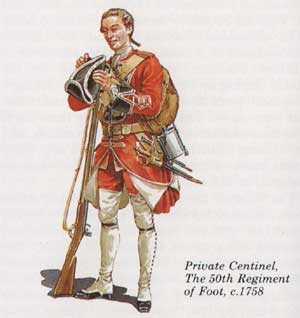 They surrendered with the honours of war and accepted the offer of a French escort to the British post of Fort Edward, 15 miles away, but the Indians, disappointed by lack of loot, turned the forest path into a shambles, by murdering the women and children. Arousing in all the British troops an uncharacteristic urge for revenge.

In October of the same year, the 35th took part in the capture of the strongly fortified town and harbour of Louisbourg in a combined operation that was a model of its kind, but it was not until September 1759 that they took their revenge on the French for failing to prevent the massacre of their wives and children at Fort William Henry. On the night of 12/13 September, in General Wolfe's army, they climbed the Heights of Abraham and at first light drew up in line of battle some 1,200 yards from the walls of Quebec. The 35th held slightly rising ground in a crucial position on the right of the line.

At about 1000 hours Montcalm's larger army came out of Quebec to attack, and had approached to within 35 yards before Wolfe gave the order to fire and then, to quote Fortescue, historian of the British Army "with one deafening crash the most perfect volley ever fired on a battlefield burst forth as if from a single monstrous weapon, from end to end of the British line."

The French unit in front of the 35th was the Royal Roussillon Regiment whose men wore a white plume in their hats. Very few survived that first volley, and the Roussillon Plume became part of the badge of The Royal Sussex. Wolfe and Montcalm were both killed in the battle and General Jeffrey Amherst completed the conquest of Canada. After the victory at Quebec, the 35th went to the West Indies where they were joined by The Buffs in a campaign against the French possessions of Martinique and Guadeloupe.

At the beginning of this war the 31st were in Glasgow, and a 2nd Battalion was raised there in August 1756. Almost exactly two years later it became independent as the 70th Foot, also known as the Glasgow Lowland Regiment, or Glasgow Greys, because their facings were grey though changed to black 10 years later. In due course the 31st and 70th Foot came together again as the 1st and 2nd Battalions of The East Surrey Regiment.

Two more regiments on the list of those which have become The Queen's Regiment were raised in 1756, the 50th, later The Queen's Own Royal West Kent Regiment (the Queen being Adelaide, wife of William IV), and the 57th, senior forbear of The Middlesex Regiment. The 50th fought in the battles of Corbach, Warburg and Wilhelmstahl, in the army commanded by Ferdinand, Duke of Brunswick, one of Europe's great soldiers. The 57th spent the war in Gibraltar.

The war, described by William Pitt, Earl of Chatham, as the first world war because there had been battles as far apart as Quebec and Calcutta, ended with the Peace of Paris in 1763, leaving France defeated and Britain with an empire that was to grow wider and still wider until the middle of the 20th century. Within 12 years there was serious trouble in the new empire and British units were again in action, this time against the rebellious North American Colonists. 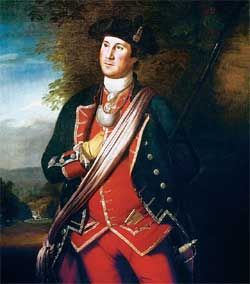 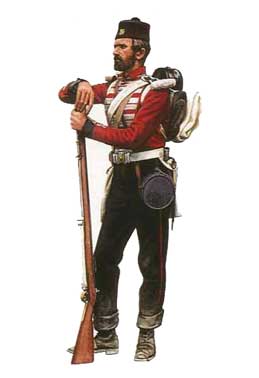 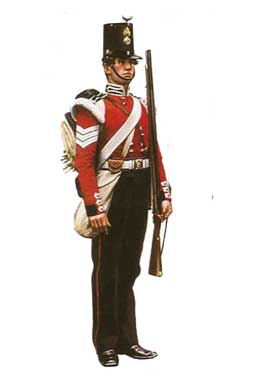